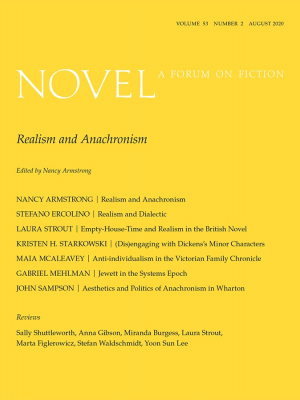 Novel: A Forum on Fiction

Novel is a peer-reviewed journal devoted to the best new criticism and theory in novel studies.  The journal was founded in 1967 at Brown University for the purpose of promoting new approaches to the study of the novel.  It succeeded in inaugurating new theoretical and critical discourses about fiction by publishing the work of such scholars and critics as Wayne Booth, Jonathan Culler, Leslie Fiedler, Jane Gallop, Gerard Genette, Sandra Gilbert, Susan Gubar, Wolfgang Iser, Fredric Jameson, Frank Kermode, J. Hillis Miller, Edward Said, Ian Watt, and Raymond Williams.

In recent years, Novel has sponsored two major conferences, “Theories of the Novel Now” at Brown University in 2007 and “Novel Worlds” at Duke University in 2012.  The 2012 conference celebrated the transformation of the journal into a joint venture between Brown and Duke Universities and its publication by Duke University Press.  The 2012 conference also inaugurated the formation of the Society for Novel Studies (SNS), with its own executive board, officers, and by-laws.  As the official publication of this new learned society, Novel will interact symbiotically with its membership and events.

The present editorial board of Novel holds to these general principles:  That so long as there have been novels, there has been a need for critical scholarship to explain how novels should and do make and evaluate the foundational categories of modern life.  That so long as novels continue to be written, literate populations will continue to dwell within novel-made categories.  That it is the responsibility of a forum on fiction to explain how those categories congealed and emerged; out of which materials and how they were naturalized and remade over time; what they found it necessary to include and exclude; how in so doing they limited the definition of the human; what relationship this definition established between those who consider themselves human and how they understand the givens of their natural environment; and what forms, however strange or commonplace, the world can take under those historical conditions.

We welcome submissions that address one or more of these concerns and use a novel or group of novels to do so.  The essays we favor are relatively self-conscious about the theoretical and historical framework that informs their critical argument, so long as that argument uses fiction to challenge the historical narrative or theoretical assumptions that are brought to bear on it.  We tend to reject over half the submissions we receive on the grounds they are either too descriptive, confine themselves to a close reading of one or more novels, or fail to change the way we read a novel or novels, their authors, their readers, or the culture that produces those novels, authors, and readers.